It may sound like the stuff of science fiction, but there is a much untapped potential that lurks at the bottom of the sea, and underwater data centers may well be a common thing in the near future. In fact, there already is one. Last year, Microsoft sent an ultra-secret, portable test facility into the deep blue just off the coast of California. After nearly five months, the facility was retrieved and sent for further testing to Microsoft’s campus in Redmond. With that testing complete, the company has announced the project as a success, paving the way for future underwater data centers in the future. 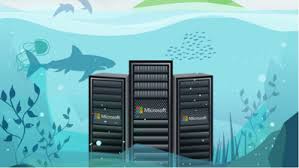 The whole experiment is known as Project Natick, which aims to eventually develop multiple underwater data centers near coastal towns throughout the world. This first test center; however, was called Leona Philpot after a character in the popular game Halo. Project Natick evolved from an idea proposed by Microsoft employee Sean James in a ThinkWeek paper and was heavily influenced by James’ time serving on a U.S. Navy submarine.

Some of the inherent benefits of placing data centers underwater include reduced cooling costs, cheap real estate, and the potential to use renewable energy for power. In above-ground data centers, it is very expensive to keep computer equipment at a cool temperature, which is completely unnecessary underwater. At present, using space on the ocean floor is free – although there may be changes in the future. There is also the possibility to harness wave and tidal power to keep data centers running smoothly.

Another huge benefit to having underwater data centers lies in the extra security. It is next to impossible to sneak up on a facility at the bottom of the sea without detection and intervention. So, physical threats are naturally thwarted just by positioning those centers out of reach. The ocean is also a natural shield from sunlight, which can have catastrophic effects on computer systems. Although it is possible to achieve this protection above ground, it usually comes with high construction and maintenance costs.