What, Exactly, is the “Internet of Things”? 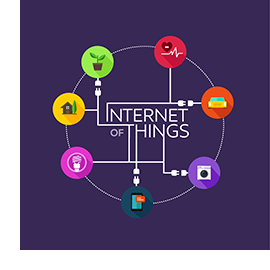 One of the most popular buzzwords in tech today is the “Internet of Things” (IoT) but what exactly is it referring to? This week, we’ll explain the very basics of IoT and how it will continue to transform the way we communicate and conduct business in the 21st century.

The phrase “Internet of Things” was first coined in 1999 by Kevin Ashton, executive director of the Auto-ID Center at MIT, and referred to the myriad of devices that would eventually be connected to the internet. In summary, the “internet of things” is the natural evolution of the network, whereby smart objects on the network have the ability to collect data, in addition to users having the ability to connect to those devices and issue commands, such as remotely setting a home or business’ security system or setting a home DVR to record a television show, from a remote location, miles away.

Today, the “Internet of things” includes mobile phones, tablet computers, cars, fitness trackers, refrigerators, security systems and light bulbs, just to name a few. All of these devices collect data and exchange it through dedicated sensors, over the internet. In 2010, there were over 12.5 billion devices connected to the internet, even though the worldwide population was only 6.8 billion, marking the beginning of “the Internet of Things” – where devices on the network outnumber human beings on the network.

The following are some of the ways that IoT will make our lives easier:

Healthcare providers will have the ability to monitor patients without visiting them in person, reducing healthcare costs and significantly reducing the risk of errors and omissions. Medical devices may even, at some point, have the ability to administer medication, ensuring the patient is always comfortable, even when a doctor cannot be immediately reached. There are a myriad of ways that IoT will help modern medicine make significant advances. Google, for example, is currently working on a contact lens that has the ability to measure glucose, making life easier for diabetics.

Self-driving cars may be the most cutting edge example of IoT. You can now buy a car that will drive you to and from work, suggest potential shortcuts based on real-time traffic conditions, notify you of weather forecasts and even suggest what type of music you might like to listen to on the commute. It’s only a matter of time before these vehicles are the rule, rather than the exception.

Some cutting edge examples of smart housing include sensors that can detect human behavior and adjust the mood of the house accordingly by dimming lights and putting on soothing music, for example. Other examples may include the ability to draw a hot bath for the owner or brew a pot of coffee, automatically, based upon user input.

Manufacturers can benefit from IoT by tracking their product from the initial sale to production to shipment, all while monitoring parts inventory levels and benefiting from AI that automatically orders new parts, as stock runs low, before any employees are even aware of the issue.

As is the case in every technical revolution, the “IoT” may mean that certain tasks are handled by automation, allowing businesses to prosper in an age of Artificial intelligence and internet connectivity. If you would like more information about IoT, including which IoT platforms would best suit the needs of your product or solution, we invite you to fill out the form on this page and someone from our offices will get back with you.